A need for a navigational chart aroused as man started to navigate through waters and the importance of hydrography came into play since then. Hydrography involves a process, from collecting data in the field to the preparation of the chart in accordance with the highest international standards and contributes immensely to the economic development of a country. The International Hydrographic Organization (IHO), which has 94 member countries including Sri Lanka, coordinates hydrographic activities worldwide through 15 Regional Hydrographic Commissions (RHCs). The IHO was founded in Monaco on 21st June 1921.

Advanced training is essential to acquire the highest skills in hydrography and for this purpose, officers as well as sailors of the Sri Lanka Navy are sent to various countries such as Great Britain, India, Bangladesh and Malaysia for training. Furthermore, the Naval and Maritime Academy, Trincomalee conducts Survey Recorder training courses for sailors. Basic knowledge on advanced Mathematics and Physics and being able to take risks and face challenges are key factors to become a qualified Hydrographer. Other than the theoretical training, it is essential to undergo challenging training out at sea and on land. The opportunities to use state-of-the-art technological tools as well as the knowledge gained through data analysis are some of the greatest blessings a Hydrographer could achieve in his life.

Hydrography contributes immensely in maritime boundary delineation, maritime environmental conservation and coastal conservation etc. and also, instrumental in the economic development of a country by assisting in the exploration of marine resources. Therefore, it is imperative for all coastal states to place Hydrography in the right position of the national plan. In fulfilling this national requirement, Sri Lanka Navy Hydrographic Service carries out surveys of national interests like annual surveys of International Ports in Colombo and Hambantota and contributes to the determination of coastline around the island. Also, Sri Lanka Navy Hydrographic Service was instrumental in preparing the report for the Continental Shelf Claims under the United Nation Convention on the Laws of the Sea (UNCLOS) which will facilitate Sri Lanka to claim a sea area 27 times the total landmass.

The Sri Lanka Navy Hydrographic Service, having identified its obligations towards the future generation, conducts annual lectures on hydrography for students of the University of Ruhuna, University of Uva Wellassa and General Sir John Kothelawala Defence University as part of their degree programmes and practical sessions in parallel.

The Sri Lanka Navy Hydrographic Service has also been able to fulfil its national responsibility by utilizing its expertise in maintaining relationships in the international arena. Rear Admiral YN Jayarathne, Chief Hydrographer of the Navy is the current Chairman of the North Indian Ocean Hydrographic Commission (NIOHC); the regional cooperation of the IHO and its 20th meeting is scheduled to be held in July this year. SLNHS was successful in securing the support of the Indian Navy Hydrographic Department in surveying sea areas vital to international maritime routes around Sri Lanka, accustomed to modern standards. Also, the training opportunities obtained for its officers and sailors from different countries have also contributed in maintaining fruitful relations with other countries.

The centenary of World Hydrology Day falls on 21st June 2021 and it is celebrated under the theme of “One Hundred Years of International Cooperation in Hydrography”. In such a backdrop, the Sri Lanka Navy Hydrographic Service is committed in maintaining the safest navigable sea routes in and around the waters of Sri Lanka, extending all possible support for the national interests. 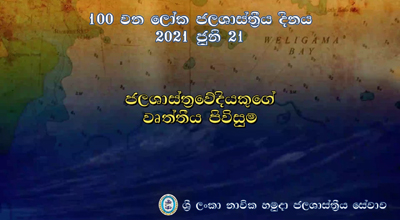 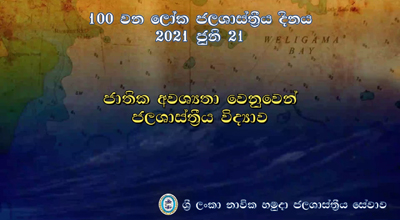 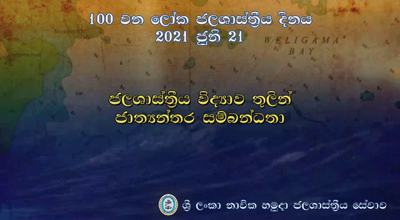 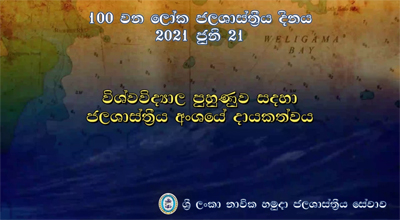